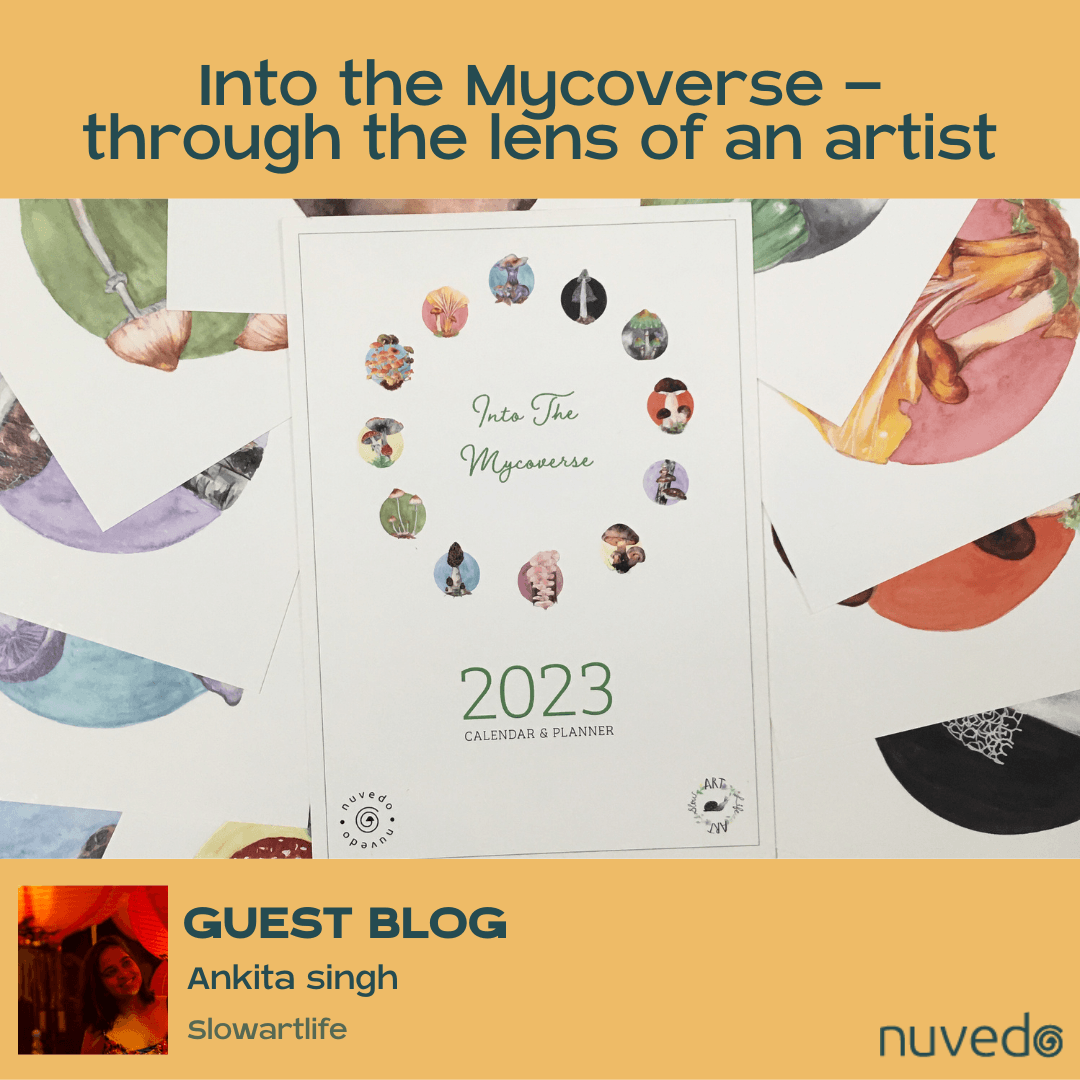 As an artist, I am often asked ‘what are you working on these days?’ When I say fungi I usually get amused and sometimes a bewildered ‘oh’?! Perhaps most people think of them as creepy rotters. But when I tell them about fungi superpowers they are surprised. Simply because there is no other organism on planet earth as mysterious, magical, and as old as fungi. They are a symbol of transformation, death, and rebirth.

So let me take a moment to talk about what makes them awesome and why we need to pay attention. They are one of the first species on planet earth known to have survived some major extinctions. It is estimated there are about 3-5 million species of fungi, and only about 10% is known to us. It’s crazy how little we know about them. This remarkable organism underpins all life on earth, which makes them fit into a wide spectrum. From being climate change allies, to being a meat, leather, and plastic alternative, to making our medicines, being psychotropic for our mental health and so much more. Mushrooms are both a source of inspiration and a symbol of change.

I first heard of mycelium a few years ago in a TED talk by Suzzane Simard and I was blown away by her discovery that trees can talk and share, it stayed with me. My interest began to brew further during conversations with friends about mushrooms’ mind-altering properties. But it was only after listening to Paul Stamets podcast with Joe Rogan did it really get my attention. Paul Stamets is a hero of our times. (in the western world). His knowledge, passion, and advocacy for mycology provoked a deep interest. From there on there was no looking back, I went into a rabbit hole. I suppose being a former student of biotechnology and microbiology also formed a base for my inclination. I binged on several documentaries and podcasts of mycophiles like Michael Pollan, the McKenna brothers, and others. The film ‘Fantastic Fungi’ mesmerized me. Louie Schwartzberg has beautifully captured the enigmatic beauty of mushrooms. Reading Merlin Sheldrake’s ‘Entangled Life’ gave me a much deeper understanding and perspective on the fungi kingdom. The more I delved the more I found myself mystified by the myriad of funky fungi. And I realized that I need to explore it from both a spiritual mindset and a scientific eye. They both go hand in hand, especially in the case of fungi. I am fascinated with fungal formations in the natural world. How they grow, form partnerships with plants, and the mysterious ways in which they appear for a time and cycle back into the earth. Over the last few months, mushrooms (mycelium) became one of my favorite muse of all time. The more I read & researched, I felt the need of spreading awareness and evoking interest in people about fungi through art, a powerful medium. Through the act of creation, I cultivated a deep understanding of their power and mysticism. My fungi and mushroom art series is an ode to them. The botanical mushroom illustrations are inspired by Beatrix Potter’s vintage-style illustrations. These colorful paintings celebrate the beauty of mushrooms.

The other series, a black-and-white fungi illustration explores fungi being a medium of liberation and cosmic connectedness.

What we commonly know of fungi is their fruiting body, the mushrooms. Beneath the soil lies the real marvel, mycelium. It is the vegetative part of the fungus. They can grow extremely fast and form a network of fibers known as hyphae, which can go miles and miles long. They are the underground decentralized intelligence network, sharing information via hyphae & produce mushrooms when the conditions are favorable. It is a window to understanding nature.

These mycelia form a symbiotic relationship with some trees and plants roots to receive sugar and in return they provide them with nutrient rich elements like phosphorus and nitrogen, referred to as mycorrhiza (myco – fungi, rhiza – roots) this relationship acts as the thread of life, forming the wood wide web, a term coined when Suzzane Simard made her findings about the shared mycorrhizal networks. Although there are skeptics in the scientific community, Merlin Sheldrakes says, ‘the idea there is a single kind of wood wide web at all is misleading. Fungi make entangled webs whether or not they link plants together. Ecosystems are riddled with webs of non-mycorrhizal fungal mycelium that stitch organisms into relation. I find this as a more holistic way of looking at it.

This fascinating system is helping us better understand and model economics, epidemics, mathematics and technologies like the internet, AI & bitcoin. A great example of biomimicry. Their power and potential is unlimited. In the manufacturing, industry mycelium is proving to be a breakthrough sustainable material for footwear, textiles/ fashion, plastic, and packaging. This is a revolution!

Many young entrepreneurs in India have realized the potential and the gap in the market. Brands like Nuvedo are educating, growing & supplying gourmet and medicinal mushrooms like reishi, lion’s mane, shiitake, etc to the Indian ecosystem Thanks to a Mushroom Identification Masterclass: Certification Course I did with Nuvedo & Hari Krishnan (@Indiantoadstool), I was inspired to go for a few self-driven mushroom foraging trips. I was thrilled to witness their beauty firsthand, these clandestine organisms are everywhere hiding in plain sight.
Spotting & identifying them was a different kind of a high!

This journey led to an exciting collaboration with Nuvedo Labs. Our mutual love for art & mycology culminated in launching a beautiful and practical product –  mushroom calendar & planner 2023, Into the mycoverse. Celebrating each month with a new mushroom art.

What also interests me are their mind-altering properties and their ability to expand our consciousness. A few months back I had a vision that showed me the reality of universal love and how we are all interconnected. It was a powerful, profound experience. Many people have had similar experiences, isn’t this interesting and mysterious? A question arises.

Do fungi (psilocybin) wear our minds? Late ethnobotanist Terrence Mckenna, a great advocate of this view, said ‘Fungi have no hands with which to manipulate the world but within psilocybin as a chemical messenger, they could borrow a human body and use its brain and senses to think and speak through. I strongly believe these little mischievous beings can heal us, make our lives more meaningful, and bring harmony to the world. It may not be for everyone but creating the right ecosystem, with the right knowledge is more important rather than propaganda surrounding its use.

I am not surprised the Mayans and Aztecs called it the flesh of god. But let’s not go that far, let’s talk about something closer to home – Soma, The drink of the gods, mentioned in the Rigveda some 5000 years ago. I did some digging and found an amazing article on a Russian excavation in Mongolia. The Russian archaeologists found compelling evidence of the Indo – Iranian culture of that time, where mushrooms were a part of ritualistic use. All this was deduced through a 2000-year-old textile! Although one can’t say for sure if mushrooms were those sacred elements of the drink, it has to be a hallucinogenic plant. The finding is riveting. This is the text from Rigveda, one can decipher the meaning for themselves. “We drank Soma, we became immortal, we came to the light, we found gods.”

Much of my inspiration as an artist comes from nature, I am forever its student. The way it works has enamored me and puzzled me. Phenomenons that intrigue me the most are the interconnectedness, and how there are uncanny similarities in the natural world and beyond. The design of our neural pathways, thunder lights, the roots of a tree, veins of a leaf, mycelium, and the cosmos. Is this the common design that connects us all? A visual metaphor to show us the mysterious ways in which we are all connected? Are the mushrooms trying to show us what we have forgotten? And what does it mean for our future? They are magical in more than just the psychedelic way.

They play a crucial role in the future of technology, our species, and our planet.

We are living in the era of fungi.

If you found this journey interesting, please do check out my calendar here.