Lifecycle of a Mushroom

Typically when one thinks of mushrooms, the white dome of a button mushroom appears in the mind’s eye. This is but one of the many thousands of varieties of mushrooms inhabiting our planet today. Mushrooms come in a plethora of shapes, sizes and colours and while some are delicious to devour, others are medicinal marvels or frivolously fatal. So, let us take a deeper look at what these organisms are and how they grow.

Mushrooms, contrary to what we may think are but a small portion of a much larger organism that grows beneath the plane accessible to out visual field. The mushroom is equivalent to fruit and its job description is similar to that of a fruit. It is a fruiting body that arises from a network of thread-like mycelia that represents the main functional body of a group of fungi known as Basidiomycetes (with some exceptions). The mycelium feeds on plant matter and dead decomposing wood, at the same time releasing the nutrients locked within these substrates for other organisms such as bacteria to consume. Once the mycelium is ready to reproduce, it sends out the mushroom fruiting body whose sole purpose is to reach up and out into the atmosphere and disperse spores which are the seeds that will give rise to new fungi. 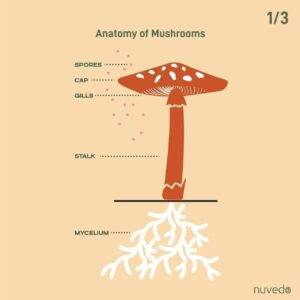 Spores represent the inherent potential in all of us as we set out in the world. As a spore is cast from the mushroom, it can travel far and wide in search of a suitable environment to set forth on its voyage to blossom into a fully grown mushroom. Once a spore experiences the right environmental triggers (some rare spores only germinate after a forest fire) biochemical changes within its dormant walls lead to the activation of genes that set the wheels of activity in motion. The tough outer walls of the spore give way to finger-like hyphae that spread in all directions in search of nutrients. The hyphae secrete proteins that break down complex organic matter into fuel for the growing fungus. 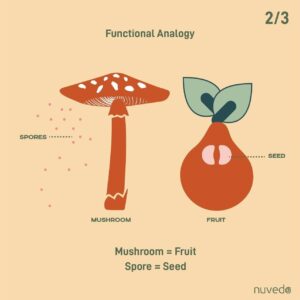 As the fungus continues to thrive, hyphae elongate and divide, and branch. The branching network of interconnected hyphae is known as the mycelium. The mycelium weaves its way through the substrate sucking up all the nutrition it can find. Nutrition, however, is not all that the mycelium seeks. In order for the mycelium to blossom into a beautiful mushroom, it needs to find a very important compatriot. A mate.

As above so below I imagine. It is as difficult for the fungus to find a mycelial mate as it is for humans to settle on a Tinder date. Mushrooms come in thousands of different mating types and two mycelia can only mate if they have complementary mating genes. If two mycelia win the genetic lottery and prove to be compatible they merge into a single mycelial network known as the dikaryon which can then proceed to form a fruiting body. 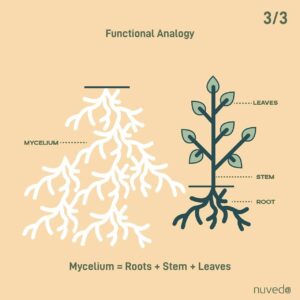 “Nature alone is antique, and the oldest art a mushroom.” 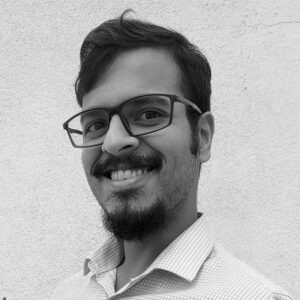 Neeladri heads Innovation and R&D at Nuvedo. As a serial experimentalist and biologist his fascination with fungi began on the Appalachian mountains where he would often marvel at the hundreds of mushrooms seemingly appearing out of nowhere in the fall season. With a master’s in Stem Cell Biology from the University of Minnesota, he has gathered a deep understanding of the processes that govern the regeneration of animal tissues and the development of life. During his most recent work at C-CAMP, he has developed expertise in the discovery and production of novel molecules from bacteria utilizing a range of techniques from microbiology, analytical chemistry, molecular biology, and bioinformatics giving him key insights into the drug development process. He truly believes that nature has the solution to all of mankind’s problems and at Nuvedo he aims to unlock the hidden potential of the fungal kingdom.